Still Me by JoJo Moyes 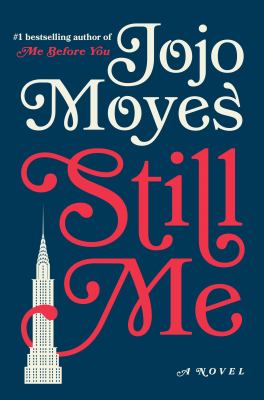 A guest post from our book club guru and top-rated (judging by the number of folks who come to her!) book recommender, Karen: “Some books you look forward to revisiting by reading a second time, or seeing the movie, or you just hope they write a sequel. The book by JoJo Moyes, Me Before You, actually fits all three categories for me. This was a great book club book, with several key discussion points, but if you are one of the few that haven’t read the book, I won’ t spoil it for you. And if you don’t want to read the book, then watch the movie by the same name, and have some tissues close by! The sequel, After You, was good and supposedly tied up loose ends, but she decided to write a third book in the series, Still Me. I devoured this latest in the trilogy over the weekend, mainly because you really fall in love with the main character, Louisa Clark, in the first book and you want her to live up to her potential. She is trying to do this by moving to New York City from England, and working for a wealthy family with many problems that money won’t fix. (Similar to her job in the first book, will she never learn?!) Along the way she connects with many other colorful characters because she is just that type of person. But one of my favorite parts of the book was how she became an advocate for an inner city library that was losing its funding, so residents were fighting for its survival. A thought expressed by one of the characters really hit home, and confirms how libraries should be thought of. “You gotta have your places for community. You gotta have places where people can meet and talk and exchange ideas and it not just be about money, you know? Books are what teach you about life. Books teach you empathy. But you can’t buy books if you barely got enough to make rent. So that library is a vital resource! You shut a library, Louisa, you don’t just shut down a building, you shut down hope. ” So not only do I love Louisa Clark, I love her empathy. And, *SPOILER ALERT*, the library gets saved!”