Book Review: The Left-Handed Booksellers of London by Garth Nix

When Susan Arkshaw moves to London shortly after her 18th birthday in the spring of 1983, she expects to find work in a pub, cheap lodgings, get acclimated before her art program begins in the fall, and begin looking into the mystery of who her father is. Instead, she finds herself in the middle of what seems to be a supernatural sting operation when a young man bursts into her uncle Frank’s apartment, sticks a silver hatpin into him, and he dissolves into a pile of sand. This admittedly odd series of events is quickly followed by the young man, who calls himself Merlin, pulling out a large revolver and dispatching an enormous louse making its way up the stairs before leading Susan through the window on a mad rooftop escape dash. Followed out of the apartment by a mysterious, super-creepy fog, she finds herself in Highgate Wood in the middle of the night, treading back and forth on the Old Road with Merlin, trying not to look at the creature in the fog, and trying to get some answers.

In this case, though, answers lead to more questions. Merlin is a bookseller, of the left-handed variety (there are also right- and even-handed booksellers, in case you were wondering!), part of an ancient group that keeps the New World separate, safe, and happily oblivious to the Old World lying just beneath. Unfortunately, Susan seems to be the focus of a great deal of Old World interest – which Merlin believes is probably related to her unknown father. Together with his sister, Vivien, the three set out to solve the mystery of Susan’s parentage. With only a faded library reading room ticket, a silver cigarette case, and a small list of possible names mentioned by her mother over the years, they don’t have a lot to go on – but as the supernatural stakes grow ever higher, Susan, Merlin, and Vivien find themselves in a race for their lives.

Garth Nix is a fantasy powerhouse all on his own, but the best way I can think of to describe this clever, laugh-out-loud, fast-paced novel is Terry Pratchett meets Susan Cooper, with a little Neil Gaiman and Dr. Who thrown in for fun. Chock full of old legends, bookshops, incredible magic, chase scenes, weird British food (Google stargazy pie!), and all things London, this is exactly the book I needed to get me out of a serious pandemic reading stall-out. I also have it on good authority that the audio book is amazing, so it would also be a good companion on a fall color weekend drive to the pumpkin patch, as well as reading well into the night curled up under cozy blanket with a cup of hot tea. No matter how you choose to enjoy it, The Left-Handed Booksellers of London is sure to make your October a little lighter! 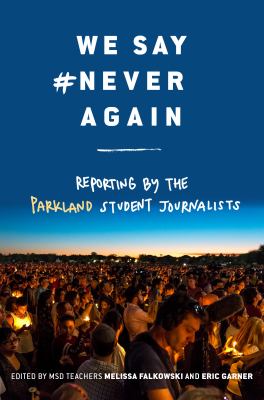 Booklist: *Starred Review*  “From the aftermath of the February 14, 2018, school shooting at Marjory Stoneman Douglas High School in Parkland, Florida, comes this collection that stands alone as a primary source document. A few pieces from the journalism and broadcasting faculty accompany dozens of short essays and photographs by student journalists of the Eagle Eye, the high-school newspaper and student broadcasters from WMSD-TV, the school TV station. Frank and sincere, if occasionally repetitive, the student essays capture the raw aftermath of a tragedy from the closest vantage point one can find. They examine the situation from myriad angles; a recent British transplant comes at it as a so-called outsider, while those closest to the heart of the #NeverAgain movement on Twitter examine their newfound celebrity and respond to public critiques. At the same time, it’s a document about the inner workings of a high-school newspaper suddenly thrust into a spotlight far beyond what staff writers could ever have imagined. Many of the students wrestle with concerns of journalistic ethics: how to interview and write when they’re too close to the subject at hand.  A book like this shouldn’t have to exist, and yet it does and for that reason alone, it deserves a space in all libraries.”

The Wrath and the Dawn by Renee Ahdieh

The Wrath and the Dawn by Renee Ahdieh

The kingdom of Khorasan is ruled by a monstrous boy-king.  Each night, Khalid Ibn al-Rashid, the Caliph of Khorasan, the King of Kings, takes a new bride.  And on the dawning of each new day, he takes her life.

Sharzad al-Khayzuran is Khalid’s next bride, but she is different from the rest of the young women who have died at dawn.  After the King of Kings cruelly stole her best friend Shiva’s life from the world, all Sharzad can think of is vengeance.  Vengeance for the dozens of lives the caliph has stolen and the dozens of mourning families, but especially for Shiva’s family, including Sharzad’s childhood sweetheart Tariq.  So, with revenge in her heart and hate in her eyes, Sharzad volunteers to be Khalid’s next bride.  She knows she will not survive the night – but, if she has her way, nor will the monster king.

But Khalid is not what, or who, she expected.  Spinning a spell of stories designed to keep the caliph enchanted by her tales and entranced by her beauty, as well as her own self alive past the dawn, Sharzad hopes only to live long enough to discover the caliph’s weaknesses and destroy him.  Instead, she finds herself reluctantly intrigued by the serious, quiet, extraordinarily gifted swordsman and king – a king whose shoulders seem perpetually bowed under the weight of his worry for the welfare of his kingdom and its people.  The same people who weep for their lost daughters and riot in the streets as the list of murdered brides grows longer.

As each new dawn is gifted to her by the caliph, Sharzad begins to see that all is not as it seems on the surface.  Khalid is haunted by a dark secret – a secret so terrifying, he cannot speak of it.  But how can she help the man who murdered her best friend?  And how can she forgive herself for beginning to care about him?

A re-imagining of the 1001 Arabian Nights, The Wrath and the Dawn is a lushly romantic, sumptuous feast for the senses.  Lose yourself in a world whose long marble halls and plush carpets (and maybe a magic one too!) are scented with roses and lilac, turmeric and mint, and where magic is lurking around every corner.  Absolutely perfect for a long holiday weekend in the sun, you’ll definitely want to add this to your vacation bag!