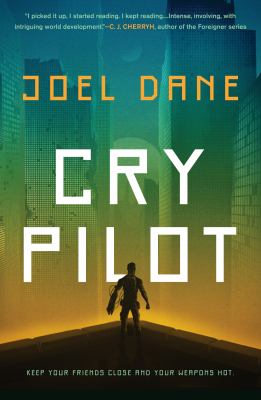 The good folks at Bookriot have an excellent one sentence description of the sub-genre of military science fiction; it’s “centered on the technologies and impacts of war on soldiers and society.” In recent years, this field has seen a lot of really great work from newer authors such as Marko Kloos and Linda Nagata, as well as by more established authors such as Kameron Hurley and Jack Campbell. Cry Pilot is the first in a new series and I REALLY enjoyed it. So much so that I’m a bit disappointed I found it before later books in the series were completed. Sigh. Publishers Weekly loved it as well: “Riveting action paired with a sharp psychoemotional landscape combine for the explosive launch of a futuristic trilogy. Centuries in the future, humans live in tiny corporate enclaves while the ruined Earth undergoes terra fixing, a process that sometimes creates biological horrors. Maseo Kaytu is a refugee with a secret, which makes it hard for him to enlist in the corporate military, but through a touch of chicanery and a stint as a cry pilot–human “keys” needed to engage highly technological, high-lethality vehicles known as CAVs–he earns his place in Group Aleph for basic training. The group is part of a program that’s been formed to address the rising threat of entities called lampreys. It’s not an easy road through basic training, but he manages as part of a squad that becomes closer than family despite his checkered past. Frequent adrenaline-rush action scenes make up most of the novel, interspersed with Kaytu’s internal narrative and experiences. This is an intriguing, thoughtful exploration of what a corporatized future might look like, liberally peppered with scenes of military life.”