The wait is over! The anxiously awaited sequel to A Deadly Education, first book in the Scholomance series by Naomi Novik, has arrived at the library. Dark Academia is one of my favorite sub-genres, and this book is dark indeed! (Scholomance is like Hogwarts, if Hogwarts was run by Voldemort’s more powerful and more evil sibling…). Highly recommended but I strongly advise reading book 1 first if you haven’t already done so.

Library Journal review: “Keep far away from Orion Lake.” Galadriel “El” Higgins knows she should take her mother’s words seriously, but she has to survive her senior year in the Scholomance, and Orion may be one of the few allies (friends?) who can help. From day one of the term, El is up against deadly homework, the maleficaria that linger, and her destructive destiny for dark power. She must fight fate, feelings, and monsters to get herself and her allies out of this horrid school alive, and the stakes will only continue to rise. When El’s power is made public, she realizes that rules were made to be broken. In fact, throwing out the rulebook entirely might mean her survival…VERDICT Sardonic students, gruesome monsters, growing friendships, and a touch of romance create a highly readable story. Some questions remain to be answered in the trilogy’s last volume. The end of this installment ensures that book three can’t come fast enough.” 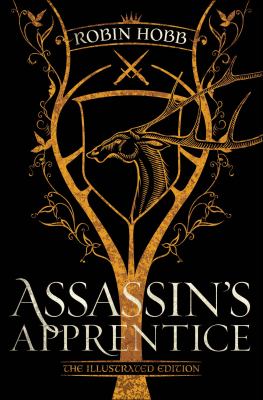 25 years ago, when I sat down to read Assassin’s Apprentice, I had no idea that I was about to start a series that would become one of my all time favorites. While it has elements common to many fantasy novels I’ve enjoyed (e.g., coming of age story, great world building), it is much slower and less plot driven than  the type of fantasy I usually like. Hobb’s strength is writing great characters and relationships and I simply fell in love with characters like Fitz, The Fool, Burrich and Molly (and developed a really strong hatred for Galen and Regal!)

This special anniversary edition is beautifully bound and contains 10 full color illustrations. Hobb  wrote a new foreword, the last line of which reads “But most of all, I thank you for offering my characters a home in your heart.” It’s funny – I know that writing is a craft and a profession and that authors rely on the sale of their works to make a living. But books have always seemed to me to simultaneously be a gift from the author to the reader. So I would say back to Ms. Hobb that her characters have indeed found a home in my heart and I am incredibly grateful she chose to share them.

The Guinevere Deception by Kiersten White

Guinevere has spent the last three years in a convent, preparing for her marriage to Britain’s High King.  The daughter of a Southern king, she has never met her husband-to-be.  The young King Arthur, famed throughout the land for his defeat of the Dark Queen and banishment of magic, and the great sorcerer Merlin, from the city of Camelot and the lands surrounding it, is a beacon of hope, his glorious city on the hill only the beginning of the peace and civilization he plans to build.

But peace comes with a price.  And magic always fights back.  Even as Camelot flourishes, dark things in the woods beyond its borders bide their time, waiting, watching, and taking back what they can.  And as magic creeps back over the land, and Merlin exiled, there is no one to protect Arthur from its hidden threat – no one but Guinevere, who is not at all who, or what, she seems.

The Guinevere riding to Camelot to be wed is not the same girl was sent to the convent to become Arthur’s bride.  This Guinevere is something else – something dark, and magic, something that revels in the forest, and the fresh air, and in freedom.  Sent in secret by Merlin to rule at Arthur’s side, even Guinevere is not entirely sure of her true, whole purpose.  What she does know is that Arthur is everything – light, bright, steady hope – and she will do anything to keep him safe, even if it means revealing her true nature.  But as she becomes more entangled in Arthur’s world, she begins to see that she is not the only one hiding.  Secrets, lies, and magic knot together until she cannot even be sure of her own past.  Will Guinevere be able to remain true to herself and her king?  Or will she lose herself along the way?

When I was a kid, I spent many, many hours with Arthur, Guinevere, Lancelot, and all his knights.  I scoured the library shelves for tales of the noble boy king, imagined elaborate scenarios in which everyone lived (except maybe Mordred, because get out of here, you creep), watched The Sword and the Stone over and over again, actually wore out my cassette tape of the original Broadway recording of Camelot (did you know that Richard Harris, Professor Dumbledore in the first two Harry Potter movies, also starred as King Arthur in 1967’s Camelot?), and couldn’t get enough of Susan Cooper’s The Dark is Rising series because it meant that it was all really, really real.  It’s also true that as an adult, I definitely have not outgrown my fascination with magical swords and sleeping kings, and absolutely cannot be trusted in a bookstore that has any Arthurian fiction face out.  So, when I saw that Kiersten White was writing a new series centered on Guinevere (who is usually kind of helpless and needs a lot of rescuing, but, to be fair, she’s probably really distracted by the impossible love triangle she’s stuck in) I couldn’t put The Guinevere Deception on hold fast enough.  A King Arthur story where Gwen is magical and a fighter and does a ton of rescuing herself and also, oh yeah, is a changeling?  Yes, please!  All the pieces are here – Merlin, Camelot, Excalibur, the Lady of the Lake, Mordred, Lancelot, even Ector and Kay – but Kiersten White pulls all the threads of the tale together into a story that is exciting, fresh, and has more than one twist in store for even the most devoted of King Arthur fans.  If you’re as nuts about Camelot as I am, or just enjoy a great fantasy read, this is a great one to curl up with on one of these long end-of-the-year evenings.  You know, while listening to your new, downloaded original Broadway recording of the Camelot soundtrack that can never, ever wear out (#sorrynotsorry, family).  Perfect!