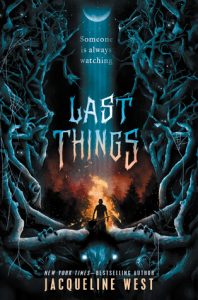 Anders Thorson lives for the music.  It’s everything to him – his blood, his breath, his bones, his life.  He, together with his band, Last Things, is spectacularly, eerily talented.  Only a few weeks away from graduation in their small northern Minnesota town, they’re right on the edge of fame and everything that comes with it.  Last Things can be found onstage at the Crow’s Nest, way out in the woods outside of town, every Friday and Saturday night, and so can everyone else in Greenwood, screaming for more.  Everyone, including Thea Malcolm, almost-invisible town odd girl, niece of a rumored witch, and Anders’s most loyal follower.

Anders has always been talented.  He and his buddies Jezz on bass and Patrick on drums have been performing at the Crow’s Nest for a few years – moving from Talent Night appearances to Tuesdays, then Thursdays, then weekends – and the band was definitely starting to get good before that weird night in the woods.  Before Anders got Yvonne, his beloved electric guitar, and before new songs started coming out of him – no, flowing through him – like floodwaters.  He’s always practiced, and practiced, and practiced.  But he’s not sure if he’s earned it yet, all the fame, and the screaming, and the fans, and the attention of gorgeous Frankie Lynde.  Really paid for what was given to him.  And until he knows the music is really his, Anders isn’t ready to take the next step forward, into the future that waits for him and the guys after graduation.

Thea Malcolm is always waiting.  Watching.  Following.  Waiting and watching and following Anders, and the woods, and all the dark things that wait there, crouching in the shadows, looking for the cracks to slither through.  She knows they’re coming, but she isn’t sure yet how, and when, or where.  Or what they’ll take along the way.  So until she does, Thea will keep watch, following Anders into the music and into the woods – and into the darkness.  She wants only one thing – to keep Anders safe.  But what does that really mean?  And what does Anders want for himself?

A dark, deliciously creepy driving bass line of a book, rock star author Jacqueline West’s newest novel completely freaked me out in all the best ways.  A superb mix of metal and music culture, small town and high school politics, and more than a splash of creeping horror, this had me reading frantically through the night to get to the end with all the lights on – inside and out.  I’ll never drive down a dark, wooded road the same way again – and I’ll definitely be on the lookout for any flashes of blonde girls on bikes in the woods in my rear view mirror.  If you love Stranger Things, Brenna Yovanoff’s novels, or local music with some serious edge, don’t miss Last Things!  And pick up some salt and river rocks on your way home.