She Said: Breaking the Sexual Harassment Story That Helped Ignite a Movement by Jodi Kantor and Megan Twohey 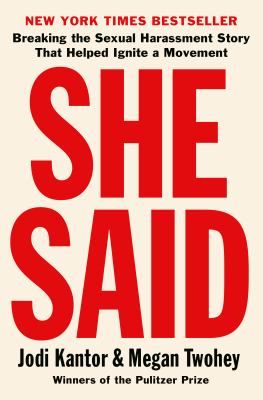 Some of the books I blog about are ones I’ve read and enjoyed. Some are ones I want to read. Some are ones that have gotten fabulous reviews. And some are ones that I think are really important. And then there’s She Said, which ticks boxes 2, 3 & 4 (and I hope to add box #1 soon!). I have read excerpts but not enough to write a full review so I’m turning to the professionals:

“An instant classic of investigative journalism. The book is packed with reluctant sources, emotional interviews, clandestine meetings, impatient editors, secret documents, late-night door knocks, toady lawyers and showdowns with Weinstein himself. The cumulative effect is almost cinematic, a sort of “All the President’s Men” for the Me Too era, except the men are women, and they don’t protect the boss, they take him down.”— Carlos Lozada, The Washington Post

“She Said is first and foremost an account of incredible reporting, the kind that takes time, diligence and the kind of institutional support many newspapers can no longer afford. For journalist readers, it is a chance to watch experts at work. And this book is a rare view for nonjournalists into the exacting and rigorous process of quality reporting, and it acts as an implicit counterargument to rising, ambient skepticism of the press. Kantor and Twohey show the background research they ran on sources, to protect both them and the paper, the careful way they documented and substantiated information, and their extraordinary precision in acquiring proof.”— NPR

“*Starred Review* The dogged investigative journalism that brought down Hollywood producer Harvey Weinstein is spotlighted in this gripping memoir. New York Times reporters Kantor and Twohey recount their months-long probe, which uncovered claims that Weinstein sexually assaulted or harassed many women, from actors Ashley Judd and Gwyneth Paltrow to employees at his company; the Times exposé led to formal rape charges and sparked the #MeToo movement… The authors deliver the sordid details—the seemingly innocent hotel-room meetings, the sudden demands for naked massages, and worse—but focus on the reporting: stakeouts of sources, document searches, assignations with an informant, fencing matches as they wormed information out of Weinstein’s flunkies, and the bullying they received from Weinstein himself, a larger-than-life figure of bluster, menace, and self-pity. Along the way, they grapple with the apparatus of secrecy protecting Weinstein—the colleagues and lawyers who covered up abuses, the confidential settlements that legally silenced some accusers, and the fear of industry retaliation that kept others from speaking out. The result is a crackerjack journalistic thriller that becomes a revealing study of the culture that enables sexual misconduct.”— Publishers Weekly