On Desperate Ground: The Marines at the Reservoir, the Korean War’s greatest battle by Hampton Sides 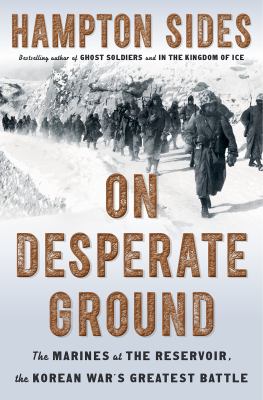 Once again, our guest reviewer today is the library’s very own ex-Marine, Gene Grave.  Here’s what he had to say about On Desperate Ground:

Hampton Sides is an author who hails from Tennessee and currently resides in New Mexico with his family. Sides received a BA in history from Yale University which helps explain his interest in writing historical books such as On Desperate Ground. Other books written by Sides include In the Kingdom of Ice, Hellhound On His Trail, Blood and Thunder, and Ghost Soldiers.

For you history buffs, On Desperate Ground deals with the battles of the Chosin Reservoir area and events leading up to the battle. As many note, the Chosin Reservoir battle was the largest, most written about battle of the ‘forgotten war’ – the Korean conflict/war. Unlike several books written on the battle that deal solely with the different units and movements, which are interesting, Sides gives some political background to the conflict and personal stories of some of the combatants. I’ve read other books dealing with WWII and the Korean war that cover General MacArthur but Sides goes into further depth which highlights both General MacArthur’s brilliance and idiosyncrasies that lead to the US and UN forces being ‘surprised’ by the Chinese involvement at Chosin Reservoir.

On the political side, Sides went into some of the events that distracted the US politicians during this time (like the assassination attempt on President Truman) and the President’s reliance on General MacArthur and his entourage’s thoughts on what was happening.

On Desperate Ground was a well written book, though as in several other books and articles on the subject that I’ve read, the Army’s story was on the light side as to what happened and the reasons for it.

As history has shown of the battle, General Smith and the Marine 1st Division carried the day and kept the battle from being a disaster through their training and determination-but as those who know me will agree, I am biased on the matter.